I had a great time on 2020’s Vegas poker run. Our big hand was 888 with pocket 8s. This pot started out 4 handed, we all only just called the big blind before we all called a raise from the small blind, so the pot was built up a little already. I’m closest to the button, so I feel with a medium pocket pair I’m being quite sneaky with my play here. The flop comes Q – 8 – 2. Oh yeah, I hit my 8! A beautiful flop for me, I have middle set. There was a flush draw on there though, and a gut-shot straight draw.

Thats where the action starts.

It’s on me — YES! — Sitting here with 3 eights. I act pretty swiftly, only slowing because I have chips to count. I did think about this one…what I came back with is this: I asked myself, do . I . think . I . have . the . best . hand . here? My objective is of course to build up the pot as much as I can. And on this hand I decided if I know I have the best hand, I am going to make my opponent(s) pay to see another card. As Scotty Nguyen would say, “That’s Poker Baby!”

I re-raise, calling and pushing 2 stacks of chips in for a re-raise, making it $175 for anyone left to see the next card.

The original raiser folds quickly, then player 2 flat calls me pretty quickly. I don’t put him on anything except for maybe A8. A pre-flop raise would have come from an AQ or AK type of hand at this table. Thats another reason my 88 no pre-flop raise was so sneaky. Action gets back to the guy who raised $75 who thinks for a while, then slowly calls the bet.

Holy cow, we are 3-handed going to the turn.

Turn is an off-suit 6, a perfect card for me. At the start of this interaction, I had a read on the table, and post-flop I knew I had the best hand and was going to play the pot as if I have the best hand until something I see on the board can possibly beat me, and its a hand I could actually put my opponents on.

First to act bets, player 2 raises, so I was forced to again come back to my gut. Acting on instinct I think for just a moment, check my cards, pause again before declaring “I’m all in.” I had both other players covered. When first to act called the turn he only had about $150 in chips left and was pot committed, so he quick-called. Player 2 stood up and started pacing, talking to himself and going through scenarios in his head and out loud. I had about $450 in chips left and he had about $300, so it was still possible for him to fold. He eventually puts all his chips in the middle–which scared me!

The river is a Queen pairing the board, and I had flashbacks of river Queens from my online PLOH days. Player 1 mucks (flush draw), player 2 flips over 22 for a full house 2s and Qs, and I flip over the winning full house 8s and Qs.

The pot ended up being over $1100, I left the table with 2 racks of chips in about 2.5 hours of play. Then I snapped this photo.

I hope you enjoyed the story of 2020’s poker run to Vegas. Maybe next year you can join me! 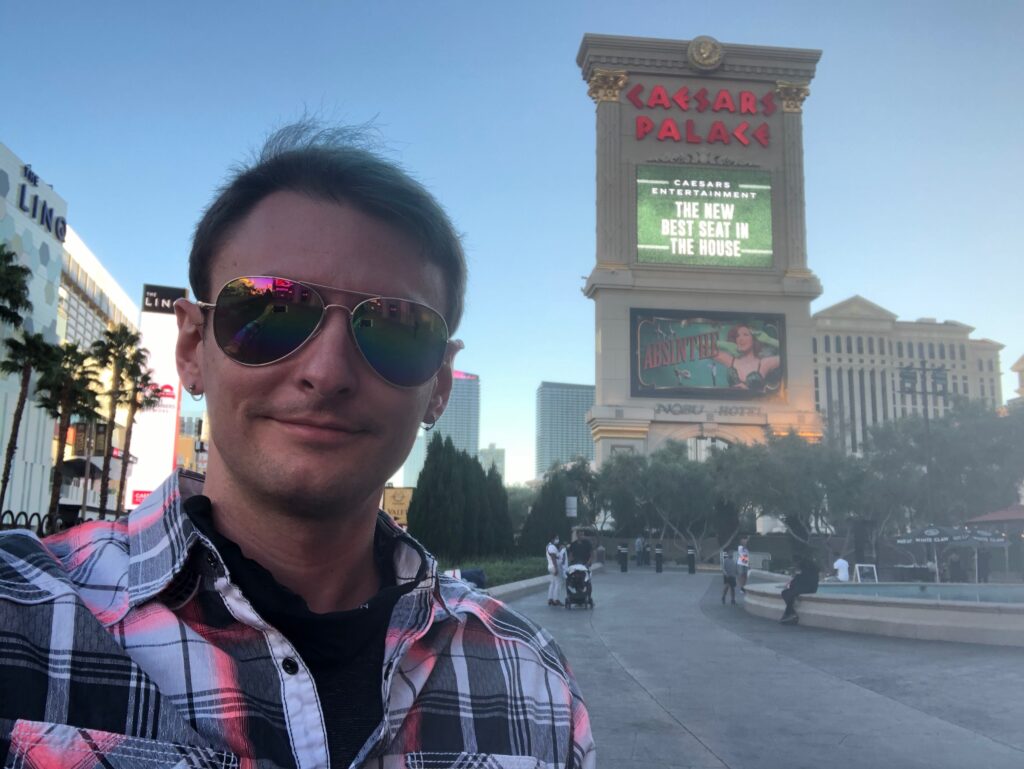